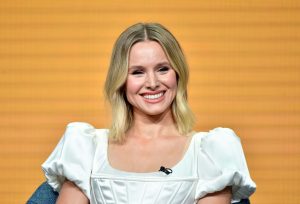 When Kristen Bell is on set, her go-to snack is not what you might expect from a Hollywood actress: It’s a salt bagel with cream cheese.

The star of NBC’s “The Good Place” and Disney’s “Frozen 2″ told Women’s Health that she relies on carbohydrates to keep her mentally sharp.

“I have to eat carbs because I have to memorize 11 pages of dialogue,” Bell said in an interview for the November issue. “And I can’t do that eating spinach and chicken.”

Although low-carb diets, such as the ketogenic diet, have gained popularity in recent years, carbohydrates are the body’s most readily-available source of energy and convert to glucose, the main source of fuel for your brain.

A longtime vegetarian, Bell’s diet does include protein and veggies. She eats protein shakes made from plant-based protein sources such as pea protein or hemp milk. And for lunch she typically eats salads and will make a chickpea pasta dish for dinner. Despite the trendy ingredients, Bell says husband Dax Shepard shops at an affordable grocery chain, not a fancy one.

Bell added that she doesn’t restrict herself when it comes to food. “I find that through conscious eating, I’m able to have all the rewards and also maintain a healthy, steady diet,” Bell told Women’s Health. (Conscious or “mindful” eating is a non-diet approach that encourages people to pay attention to and notice their food choices and habits without judgement.)

Beyond her diet, Bell has leaned in to some other buzzy wellness trends to keep her mental health in check.

For example, Bell, who has says she has struggled with anxiety and depression since she was 18, takes a dropper of cannabidiol (CBD) oil on her tongue to help manage anxiety. (Some studies show CBD to be effective for anxiety, including insomnia.)

She also told Women’s Health that she adds adaptogens to her smoothies — adaptogens are herbal compounds that are supposed to work with or “adapt to” your body’s stress response to reduce it. (At the moment there is very limited scientific evidence that adaptogens can combat the physiological effects of stress, and adaptogen supplements aren’t regulated by the Food and Drug Administration.)

In addition to these holistic remedies, Bell said she takes antidepressants to help with “waves of serotonin imbalance” and still goes to therapy. In the past, she’s revealed that she goes to couple’s therapy with Shepherd.

Exercise is another habit that has increased her focus and physical strength. She takes a Pilates-inspired workout class at the boutique gym Studio Metamorphosis three times a week.

After a workout, “I feel so much more centered, patient, capable,” Bell told Women’s Health. “It sets the next 48 hours for me.”