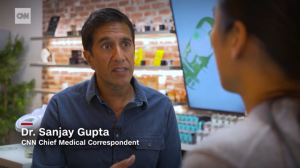 New York (CNN Business)2019 was a momentous year for the cannabis industry: Hemp-derived CBD had a heyday, Illinois made history, California got sticky, vapes were flung into flux, and North American cannabis companies received some harsh wake-up calls.

2020 is gearing up to be an even more critical year.
There’s a well-worn saying in the cannabis business that the emerging industry is so fast-moving that it lives in dog years. 2020 is barely a week old, and cannabis is already making headlines after Illinois kicked off the new year with recreational sales. Other states are inching closer to legalization this year — with several mulling how best to ensure social equity. Also in 2020, there’s the FDA could chill the CBD craze, and a move from Congress could change the game entirely.
The tumultuous past few months have set 2020 up to be a make-or-break year for some of the biggest in the business as well as the scores of lesser-known players priming to make their moves.
“There’s going to be a lot of movement in 2020,” said Chris Walsh, chief executive officer of Marijuana Business Daily, a cannabis industry trade publication. “Whether it leads to actual legalization in some states remains to be seen.”

The next US states to legalize cannabis

Fourteen US states and territories have legalized recreational cannabis sales for adults (although regulations aren’t fully fleshed out in places like the District of Columbia and Vermont). A total of 33 states have legalized cannabis for medical purposes.
Illinois will remain in focus, after it made history last year with the first legislatively-enacted recreational cannabis program. Critical aspects of its program include social equity and social justice measures created to help people and communities most harmed by the War on Drugs.
“Underserved groups are holding the industry accountable,” said Gia Morón, president for Women Grow, a company founded to further the presence of women in the cannabis industry. “And our legislators are recognizing that [social, gender and minority concerns] are a part of this now.”
New York and New Jersey have been flirting with legalization but have held off to navigate some logistics related to aspects that include social equity. The governors of New York, New Jersey, Connecticut and Pennsylvania convened this past fall for a summit on coordinating cannabis and vaping policies. New Jersey is putting a recreational cannabis measure before voters in November, and Gov. Andrew Cuomo vowed Wednesday that New York would legalize cannabis this year.
Other possibilities for states to legalize recreational cannabis could be Arizona, Delaware, Florida, Minnesota, Montana, New Mexico, North Dakota and South Dakota, Walsh said. Even Alabama, Mississippi and South Dakota could become new medical cannabis markets and other states’ medical programs could see expansions, he added.
“If you look at the map right now of the US, we’re getting to the point where there isn’t that many [states] left that can legalize,” he said. “You can look at any of those and say there might be a chance in the next year or two for them to legalize.”

Whether national legalization is on the horizon remains to be seen, said Walsh.
How federal agencies regulate hemp, a cannabis plant with under 0.3% tetrahydrocannabinol (THC), and derivatives such as cannabidiol (CBD) could be extremely telling for how the US government might approach regulation of other forms of cannabis down the road, he said.
CBD products have been all the rage, but they may be on shaky ground. CBD oils, creams, foods and beverages have seen an explosion in availability following the passage of the 2018 Farm Bill, which legalized hemp but left plenty of discretion to the US Food and Drug Administration, which regulates pharmaceutical drugs, most food items, additives and dietary supplements.
The FDA is reviewing CBD and has yet to issue formal guidance, although the agency has issued warning letters to CBD makers that make unsubstantiated health claims. Class action lawsuits have been filed against several CBD companies, including two of the largest, Charlotte’s Web and CV Sciences, alleging they engaged in misleading or deceptive marketing practices, Stat News reported.
Cannabis insiders are closely awaiting the fate of industry-friendly bills such as the STATES Act, which would recognize cannabis programs at the state level, and the SAFE Banking Act, which would allow for banks to more easily serve cannabis companies. Those and other bills likely won’t pass in full, but it’s possible that some language makes it into more comprehensive legislation, Walsh said.
“It feels like [legalization] has to happen soon, but it might not happen how people think. You get a bill passed to allow banks to clearly serve this industry without a whole bunch of restrictions, and that could be pseudo-legalization,” Walsh said. “So, the actual move by the federal government to ‘legalize’ marijuana or let states decide might not come for years; but that reality might play out anyway with some other type of legislation.”

In addition to the promise of new markets, the evolution of established cannabis programs could also play a significant role in the cannabis business landscape.
In California, the world’s largest cannabis industry has developed in fits and starts. Regulators are taking aim at an entrenched illicit market as businesses decry tax increases and local control measures that limit distribution.
“California is going to get worse before it gets better,” Walsh said.
And in Colorado, where the nation’s first legal recreational cannabis sale took place, a slate of new laws are poised to shift the cannabis landscape by allowing for social consumption businesses and the ability for out-of-state and publicly traded companies to own licenses.

Canada’s “Cannabis 2.0” roll-out of derivative products — such as edibles, vapes and beverages — is in its beginning stages. The Canadian publicly traded licensed producers that have been beset by missed and slow market development have bet heavily on these new product forms.
But it takes time for provincial and state cannabis programs to get off the ground, for businesses to come online and for production and supply to get in a good balance with demand. So any big returns won’t happen immediately, said Morgan Paxhia, managing director and co-founder of cannabis investment firm Poseidon Asset Management.
“It’s not going to look any better in Q1 and really into Q2,” he said of the Canadian cannabis sector.

Overall, 2020 should bring volatility for cannabis companies in Canada and the United States, he said, noting the industry’s current business cycle is mirroring that of the dot-com bubble and subsequent burst.
“There were very good companies that have emerged from that period, but most of the companies during that time are gone,” he said.
Paxhia expects at least one — if not several — “blockbuster failures.”
The capital constraints are expected to continue into the first leg of 2020 as some initial bets don’t pan out for some companies, said Andrew Freedman, Colorado’s former cannabis czar who now runs Freedman & Koski, a firm that consults with municipalities and states navigating legalization.
Some companies’ low points could create opportunities for other firms and investors that waited out the first cycle, Freedman said.
“In 2020, I see that everybody will understand the economics of cannabis a little bit better,” he said.
Source :https://edition.cnn.com/2020/01/09/business/cannabis-2020-legalization/index.html