Your dog can keep calm and carry on with CBD, the cannabis that helps—without the high.

Fourteen-year-old Miniature Schnauzer Nikki suffered a severe injury in 2010 that was treated with anti-spasmodic and anti-inflammatory drugs, but they caused nasty side effects, including loss of appetite, listlessness, and lack of energy. Nikki’s owner, Susan Bolotin, was at her wit’s end, until Nikki’s veterinarian suggested hemp-based cannabidiol, known as CBD.

“Our veterinarian said she only had anecdotal evidence but there are no side effects and there was nothing to lose, “ 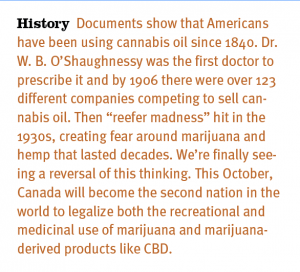 says Susan. “Within days of taking CBD tincture Nikki was playing with other dogs at the park—he hadn’t done that for months. He slept less and his appetite returned.”

The Schnauzer had been a canine athlete, competing in agility contests, but after his injury three vertebrae were fused and he had difficulty even walking. Now he was even running and wanting to play more. “We also saw a significant change in Nikki’s behaviour—his prickly personality returned. He gives me the finger sometimes,” Susan says, laughing.  She also says that Nikki is completely off anti-inflammatories, but still taking anti-spasmodic medication. “He isn’t getting better, but CBDs have vastly improved his quality of life.”

CBD is hot right now, but humans have been using it for over 8,000 years. People are prescribed medical marijuana to support the treatment of a host of ailments and illnesses, including skin irritations and cancer. So, if humans are helped by a particular medication that is natural and safe, it makes sense that we want to share it with our ailing pets.

A Veterinarian Weighs In

Dr. Katherine Kramer, a veterinarian at Vancouver Animal Wellness Clinic, is not legally allowed (as per the College of Veterinarians of B.C.) to prescribe or even recommend CBD, unless she is specifically asked about it. “I should wear a button that says ‘Ask me about CBD,’ Kramer says with a chuckle.  She welcomes this opportunity to increase awareness because for the past six years, her clients’ results are “nothing short of miracles.” Kramer’s practice focuses on geriatric and cancer patients, so she knows firsthand how CBD helps with pain and arthritis, with nausea, seizures, and anxiety.

It even helps with behaviour issues. “Some dogs before taking CBD had such horrible behaviour problems, and in an urban environment anxiety can go through the roof,” says Dr. Kramer, “but soon after taking it owners tell me they ‘have their dog back.’ And pets with cancer have been able to get their quality of life back.”

If you told Dr. Kramer six years ago that she would “discuss” medical marijuana with her clients, she wouldn’t believe you. She had the ‘aha moment’ when a client, who worked with human patients treated with medical marijuana, suggested that his cat also try cannabis. “His cat had multiple health issues; prescribed opioids were knocking him out and affecting his appetite so he had nothing to lose. He was willing to try CBD so we worked out the dosage and in no time the cat improved; his appetite and energy came back and we reduced the conventional medications,” adds Dr. Kramer. “He lived a few more quality years after that. And I started looking at more worrisome cases.”

A few years ago Dr. Kramer would get a call about CBD about once a month; now her clinic is taking calls from vets and clients across North America. In a nutshell, this is her advice:

#1 Talk to your vet about anything you are thinking about trying; your vet also needs to get educated about these products. If enough pet owners ask, it will force the vet community to take further action.

#2 It’s important to use a quality-controlled product. Be careful about the products you use as they could be laced with THC (more about that below at left) or maybe there’s not enough CBD in it to be effective. The FDA recently found that 90 percent of products they tested had little or no CBD or it didn’t match label ingredients.
Ask the supplier for a certificate of analysis and if you have any concerns start with the true hemp line, which is 100 percent safe.

Dr. Kramer thinks that CBD’s therapeutic potential is enormous, but there’s the legality issue, mainly due to insufficient clinical trials. “I’m hopeful that with more research and studies the legal barriers will fall,” she says, “and then we will be allowed to prescribe CBDs.” 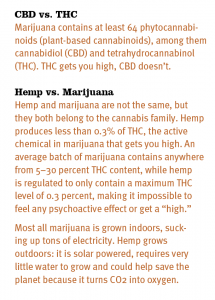 What is CBD and how does it work?

CBD is short for cannabidiol, one of more than 60 nonpsychoactive compounds found in both hemp and cannabis (aka pot) plants.  It creates beneficial physical changes to the body’s endocannabinoid system—known to affect bodily processes such as digestion, mood, and sleep.

Endocannabinoids are the chemical messengers that tell your body to get these processes moving and when to stop; they help maintain optimal balance in the body, also known as homeostasis. When the body does not produce enough endocannabinoids or cannot regulate them properly, you are more susceptible to illnesses. CBD is known to have anti-anxiety, anticonvulsive, anti-nausea, anti-inflammatory, and antitumor properties.

In British Columbia CBD is available in pet stores and every corner dispensary, and the rest of Canada is catching up. Starting October 17, 2018, Canadians will legally be able to use recreational marijuana, but it may take longer for Canadian pets to get their paws on cannabis derived treatments. Good news is that Health Canada recently approved a clinical trial to research the use of cannabidiol (CBD) to treat animal anxiety.

In the U.S., if you are in a hemp-legal state, you can order online. CBD aficionados, regardless of which state or province they live in, seem largely unconcerned with legal repercussions as punishment for procurement has thus far proven unlikely.

To give you some idea of pet cannabis consumption in the US, sales of cannabis products marketed for pets at medical and adult-use cannabis dispensaries in 2017 totaled nearly $7 million in California, Colorado, Oregon and Washington, according to BDS Analytics. In Colorado, sales of pet products grew almost 50 percent in 2017.

For her part, Susan Bolotin says CBD has been a godsend. “It won’t make Nikki better but it’s my job to make him as comfy and happy as possible and I rely on CBD to help me do that.”