As the former NBA forward strolled through Las Vegas’s MJBizCon, the largest convention for the cannabis trade in the United States, a friend texted him with the news that Major League Baseball will no longer test for marijuana in the minor leagues, a response to opioid use among professional athletes. It was a pivotal turning point for advocates such as Harrington, who believe cannabis is a healthier medicinal option.

Harrington, the founder of a cannabis company, Viola, has been championing a similar message in ­basketball.

“The day-to-day pain management issues that players deal with can be dealt with through cannabis,” Harrington said of athletes who are often prescribed pain relievers following surgery, including highly addictive opioids. “Something that is all natural and nowhere near as harmful as the stuff that they’re using now.”

Medical marijuana is legal in 33 states (plus the District), and 11 states (and D.C.) allow it for recreational use. Although he’s pro-marijuana, Harrington believes cannabidiol (CBD), the less-stigmatized and less-psychoactive cousin of weed, is an easier ­product for the NBA to accept.

Along with co-founders Joe Abunassar, a well-known NBA trainer, and Sanford Kunkel, a former team physician of the Indiana Pacers, Harrington started a hemp-derived CBD brand, Harrington Wellness. Their product carries less than 0.3 percent tetrahydrocannabinol (THC), which is the main compound in cannabis that gets a person high.

Harrington said NBA players are ready. He estimates “90 percent” of current players he speaks to support cannabis as a whole, and their backing would be the impetus for change.

“I know that — in order to get things done because I’ve played in the league so long — it has to start at the players,” he said. “That’s when barriers can be­ ­broken down.”
National Basketball Players ­Association Executive Director Michele Roberts projects there could be a league policy change by the 2020 presidential election. NBA Commissioner Adam Silver has expressed a willingness to reconsider the ban as the league examines the science behind medical marijuana. For now, marijuana and its byproducts, which include CBD, remain banned, along with more than 225 other substances, by the NBA/NBPA Anti-Drug Program.

“We think that athletes use cannabis to get high, and that’s not the case,” said Antonio Harvey, another former NBA player-turned-advocate who founded Terra Mater Cannabis Company. “Our bodies are beat to s— every single night. … And a lot of guys use cannabis to cope with that. They don’t get high to get high. They get high to feel better.”

Harrington, 39, said cannabis allows him to walk around pain-free after he underwent 13 surgeries over his 16-year playing career, which ended in 2014. There was a time when Harrington thought he would retire from basketball and go into coaching. But through his cannabis and CBD brands, Harrington believes he has found his calling.
“I have a bigger purpose in my life,” he said.

After Harrington experienced a surgery gone awry while with the Denver Nuggets in 2012 and spiraled in a cycle of painkillers, he was introduced to CBD to help relieve his pain. Harrington still applies about 25 milligrams of CBD oil from a tincture onto his tongue every morning.

Harrington later turned to THC. Or to put it plainly: He started smoking weed. By the final year of his career in 2013-14, when he signed with the Washington Wizards, Harrington said he was open about his use.

So open, in fact, that he owned a marijuana greenhouse in Denver, where he grew plants under 80 lights. When the Wizards traveled to play the Nuggets, Harrington said, several teammates went on a tour of his facility.

“They wanted to see it. They couldn’t believe it,” Harrington recalled. “… A big-ass warehouse with weed in it.”

Harrington estimated seven players on the 2013-14 Wizards used cannabis in the offseason. The Wizards weren’t the only lit locker room in the NBA. Former player Matt Barnes said he had a joint before nearly every game of his pro career. Harvey came into the league in 1993-94, before marijuana was added to the banned substance list, and claimed most of the 15 players on the Los Angeles Lakers that season smoked weed.

“Here’s a better way of asking the question: Did I know of any teammates that didn’t partake at that time?” Harvey said. “Very few.”

The irony in the debate to legalize marijuana and related products in professional sports: Many current players are already partaking.

“I don’t think it’s a secret,” Wizards guard Isaiah Thomas said of use among peers, noting he doesn’t use CBD or cannabis. “I mean, Matt Barnes and those guys talk about it all the time; they did it when they played. I’m pretty sure that players do it and it works for players.”

The waft of smoke crosses generational and cultural lines.

Golden State Warriors Coach Steve Kerr said he smoked marijuana twice while experiencing extreme back pain, which led him to miss some of the 2015-16 season. Don Nelson, a 79-year-old Naismith Hall of Fame inductee, grows his own strain of Kush on his farm in Maui, Hawaii.

Even David Stern, the NBA commissioner when marijuana was prohibited in 1999, has gone on record over the past several years to say medical marijuana should be removed from the list. Still, the league ban persists, as do the consequences. Most recently, in November, Miami Heat guard Dion Waiters consumed a THC-infused gummy on the team plane, suffered a panic attack and was suspended for 10 games.

Harvey, who said he has secured endorsement commitments from 17 retired professional athletes for Legend, his edible line micro-dosed with THC, expects that number to grow as players find their voices.

“One thing I can tell you: I’ve talked to at least 10 current players that use cannabis almost daily, but they’re older, more respected,” said Harvey, who played for six N 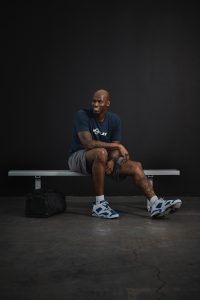 Harrington views his crusade for marijuana products as larger than just benefiting athletes. “The purpose is to use this plant, or this industry that has pretty much decimated the black community, have Viola be a company to bring the black community into this space in a significant way,” he said. (Courtesy of Harrington Wellness, Inc.)

Harrington has found an advocate in the NBPA, and the sides have talked about partnering with his CBD brand. Roberts recognizes the societal trend and believes the league would at least be more amenable to accepting CBD, which is not as clearly a violation of federal law as THC.

“No one is really averse to amending these things; we’re trying to do it in a way that eliminates the possible jeopardy of our players,” Roberts said of the NBPA and the league being of the same mind on the topic. “That’s the key. If the feds tomorrow announce we’re no longer in the marijuana prosecution business, then I’d think we’d have a deal by tomorrow night.”

There has been progress, but obstacles remain.

In January 2018, Jeff Sessions, the U.S. attorney general at the time, revoked a policy that advised federal prosecutors against interfering with marijuana businesses in states where it was legal. Until that point, the league and players’ union had discussed removing marijuana from the banned substance list. Given the possible threat from the Justice Department, those talks have been tabled.

“We were hoping that there’d be some progress, but once Trump was elected and Jeff Sessions was appointed attorney general, the landscape changed,” Roberts said. “Maybe we’ll keep talking about it, but I’m not optimistic because neither of us can say that we feel comfortable encouraging the use of marijuana. … We can say stop testing for it, so that’s an area where we can eventually make some progress in, but we haven’t got there yet. And it’s a source of frustration for me because it’s ridiculous. It’s just ridiculous.”

Medical experts endorse CBD as a less harmful pain-management option than opioids, which hit crisis levels in 2017 when the Centers for Disease Control and Prevention reported 68 percent of the more than 70,000 drug overdose deaths were caused by prescription or illicit opioids. This year, baseball was affected when 27-year-old Los Angeles Angels pitcher Tyler Skaggs died of an overdose caused mostly by fentanyl and oxycodone. Unlike opioids, CBD is not addictive.

“CBD should certainly be allowed for all kinds of athletes. It’s much safer than the other junk that they use,” said Peter Grinspoon, an instructor at Harvard Medical School and board member for Doctors for Cannabis Regulation.

But while the Food and Drug Administration has allowed the first drug with an active ingredient extracted from marijuana for extreme cases of epilepsy, the agency “has not approved a marketing application for cannabis for the treatment of any disease or condition,” according to a statement on the FDA’s website.

“Everyone tries to make CBD, for example, out as a miracle cure-all, and it’s not,” said Yasmin Hurd, the director of the Addiction Institute at Mount Sinai Behavioral Health in New York. Hurd has researched CBD for more than a decade.

“I don’t think we should necessarily wait for the 2020 election,” she said. “What’s right is right, and as baseball has demonstrated, you can move forward notwithstanding who’s in the White House.”

Harrington, for his part, views his mission as larger than just benefiting NBA athletes.

The name of his business, Viola, which he projects to be worth $100 million, comes from his grandmother, whom he says he convinced to use cannabis when she had glaucoma. It helped her read the Bible. Beyond the altruistic pursuits in helping grandmas across the globe, Harrington is hoping to make money. He recently signed a deal with a marketing company and has been in talks with several big-box stores that would carry his re+PLAY CBD products. His biggest dream is to encourage other black entrepreneurs to consider cannabis.

“The purpose is to use this plant — or this industry that has pretty much decimated the black community — have Viola be a company to bring the black community into this space in a significant way,” Harrington said. “I want to be able to create 100 cannabis owners.”

Although NBA policy remains unchanged, Harrington believes a partnership with the most visible and outspoken player base among the four major professional leagues can help change sports — and lives.

“When my obituary is [written],” he said. “I hope a hundred, a thousand families will be saying, ‘The opportunity that Al Harrington and Viola provided changed my life forever.’ ”