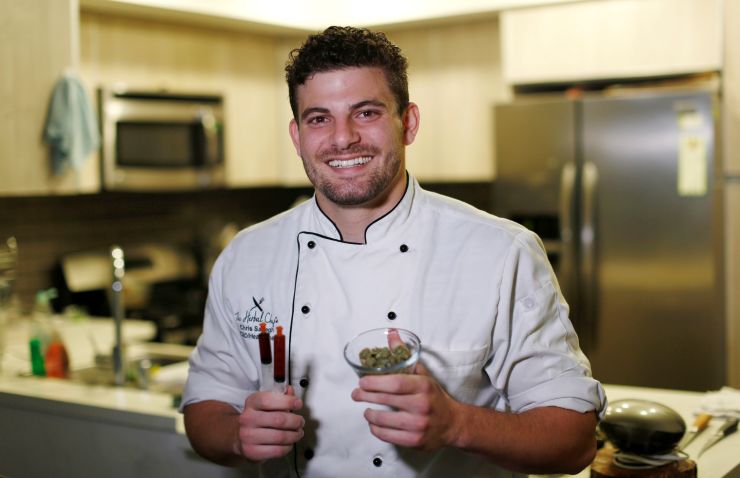 The FDA won’t approve of this year’s hot food trend.

The National Restaurant Association and the American Culinary Federation surveyed 650 professional chefs about the top culinary and restaurant concepts for 2019. It found that 3 in 4 chefs said CBD- and cannabis-infused food would be a hot trend this year.

Of course, chefs’ interest in cannabis and CBD, a non-psychoactive compound found in the cannabis plant, does not necessarily mean it is coming to restaurants anytime soon.

Cannabis remains illegal at the federal level, and only 10 states have legalized it for recreational purposes. Some restaurateurs looking to get in on the trend with a little less scrutiny have turned to private supper clubs that offer menus with upscale cannabis-infused dishes.

That’s true in Canada, too, where edibles won’t be legal until October despite the country’s 2018 legalization of marijuana.

Chef Travis Petersen travels across Canada hosting cannabis-infused dinners at Airbnb rentals. To stay relatively under the radar, he advertises his dinners on social media. Many of his diners are “canna-curious” and slightly nervous about cannabis-infused foods, so for now he sticks to using odorless, tasteless cannabis oil.

“For us here in Canada, this is a unique opportunity to kind of put our flag on the culinary map,” Petersen said in an interview. “We’re the first country of chefs that can fully legally cook with it and experiment with it, and I’m really excited to start working with more flavors, tastes and smells.”

Wealthy consumers in states like Colorado and Washington — where the drug is legal for recreational use — have also turned to private chefs who specialize in cannabis-infused food, according to Donna Hood Crecca, a principal at Technomic.

Most CBD products became legal under federal law after President Donald Trump signed the farm bill in December. However, the Food and Drug Administration prohibits adding CBD to food and drinks because it is an active ingredient in an FDA-approved drug. The regulator has set its first public hearing on legalizing CBD in food and drinks for May 31.

That hasn’t stopped some restaurants from selling CBD-infused products to respond to consumer demand. CBD, short for cannabidiol, is pitched as helping the body relax without altering the mind like THC.

“There’s people out there that are willing to risk not being in compliance with local and other regulations in order to not risk being left behind,” Hood Crecca said.

However, restaurant chains, especially those that are publicly traded, have largely stayed away from adding CBD to the menu until the regulatory issue is settled. Even after that, Hood Crecca said, they will have to consider how CBD-infused food and drinks fit in with their restaurant concept and brand, particularly if they want to bill themselves as family friendly.

For now, most restaurants that offer CBD-infused products are looking at beverages. Trendy coffee shops advertise CBD-infused lattes, while some bars have CBD mocktails on their menus. Most bartenders still avoid mixing the ingredient and alcohol given the strained regulatory environment.

Other restaurant trends landing below cannabis or CBD-infused food on the restaurant group’s survey are less mired in controversy. Zero-waste cooking, natural ingredients and upscale takeout packaging also took spots in the top 10.

Plant-based proteins landed seventh on the list as meat substitutes continue to rack up distribution deals with large restaurant chains. The Beyond Burger can already be found at TGI Friday’s and Carl’s Jr., while Burger King recently started piloting a version of its Whopper made with the Impossible Burger.

“Those two brands actually represent two-thirds of all of the growth in plant-based burgers in restaurants,” said Darren Seifer, an analyst for The NPD Group.

Environmental sustainability and paper straws ended up next to each other at spots nine and 10, after consumer demand pushed companies like Starbucks, Disney and Hilton to pledge to ditch plastic straws last year.